Let’s go back in time to 1977: GM’s new Rounded Line pickups have been on the market for almost five years and MPC has gotten wind that Monogram is going to be releasing a kit of this truck. Not to be outdone by the competition, the fine folks at MPC tool up a kit of this body style in their best-selling 1:25 scale. They even went as far as including extra parts to build different versions of the truck.

The first offering was released in late 1977 as well as in 1978 in boxes that proclaim first NEW and then 1978, as was their trend at the time with annuals. The depicted truck is a Scottsdale 10 trim, which is the entry level package with little exterior chrome and a bench seat. The bed is a one-piece stepside with opening tailgate. The engine is a standard Chevy small-block, comes with stock valve covers and chromed, finned valve covers, and is mated to a Turbo Hydra-Matic transmission. This version of the kit included two wheel options, side exhaust pipes, high-rise intake manifold with hat, custom grille with quad-square lights, and some wild decals. Curiously, the box art trucks have no mirrors. Molded in white, stock number 1-7814. 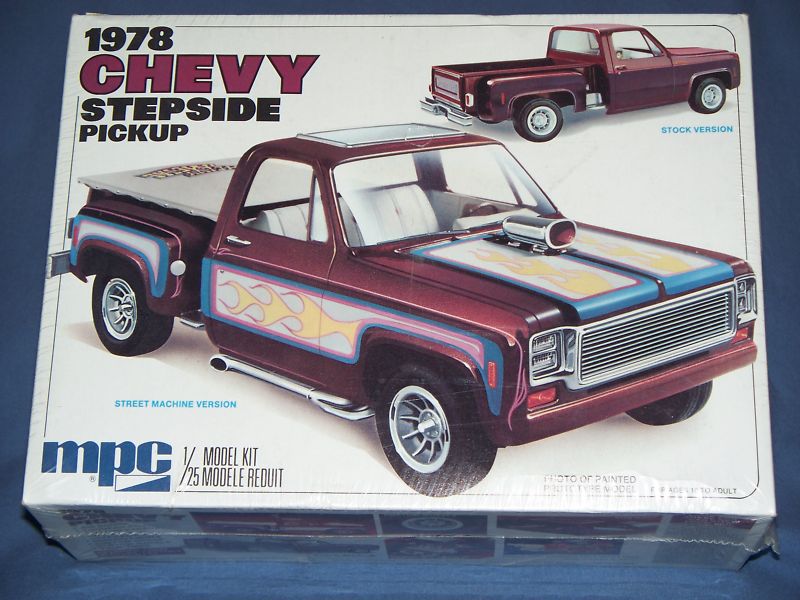 As of this writing, this was the only 2WD offering of this tooling. 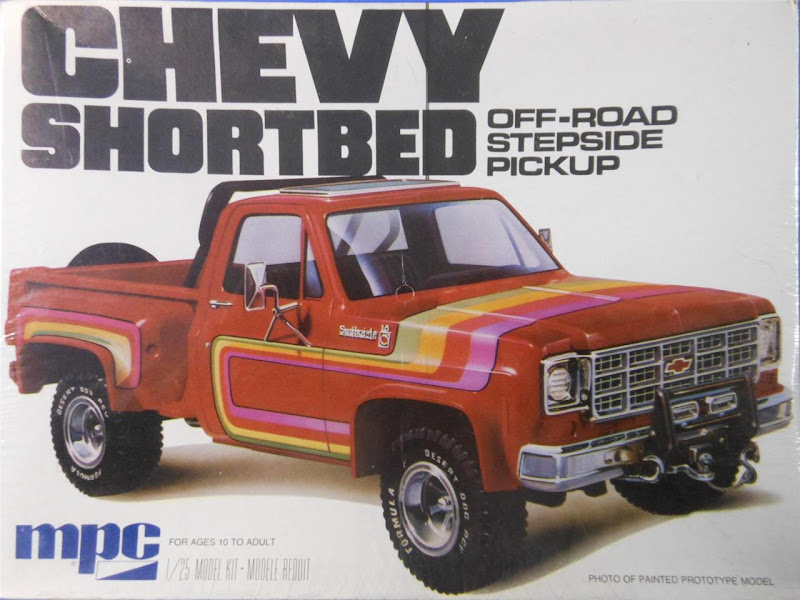 Again in 1978 another version of this kit was released with different decals as the Dust Devil. This version included a set of bucket seats and a console but curiously the engraving remained the Scottsdale trim. Box art shows a stock 2WD version as well as the off-roader but there are no other indications that the kit has multiple build options. Mirrors remain the same tri-pod style.This time the grille was modified with a larger chrome surround for the 1979 model year. Molded in black, stock number 1-0419. 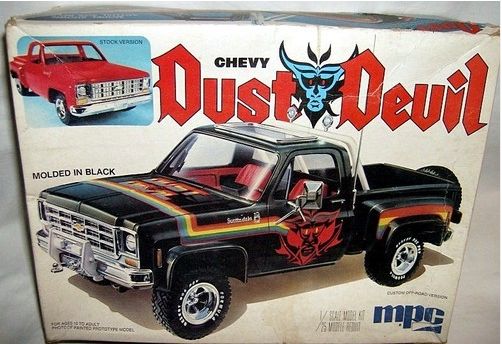 A third run of the tooling was made in 1978, this time as a Super Dualie (sic). Still a stepside bed, extra-wide fenders cover the extra set of wheels out back. A hood scoop is also included to cover the high-rise intake manifold that returns from the original issue. Also unique to this issue is the heavy-duty front bumper and grille guard. The only grille available for this build is the same custom tube grille, also from the original issue. Mirrors are the tri-pod style. Molded in black, stock number 1-0424. 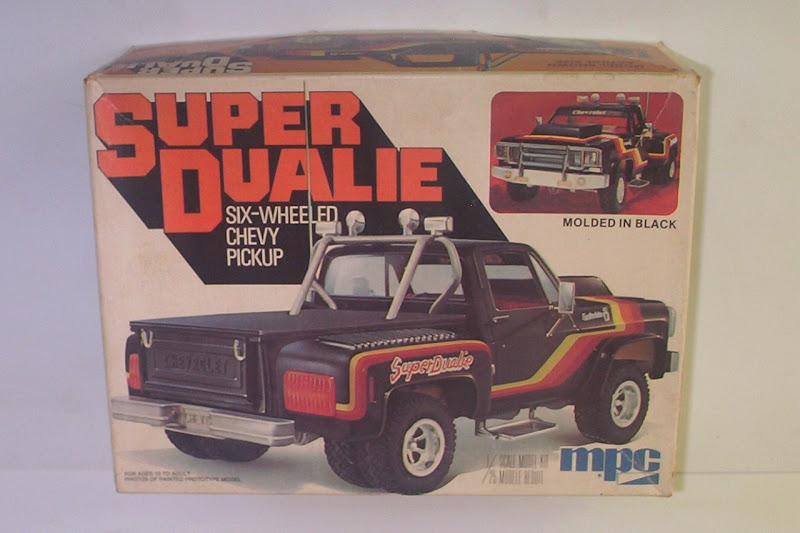 Sometime in 1979 the tooling was slightly modified to accomodate the new-for-1980 grille, which would end up being a single year offering. This time the kit was branded as the Mule Skinner and was otherwise a straight reissue of the Dust Devil. The tri-pod mirrors carry on. Molded in red, stock number 1-0433. 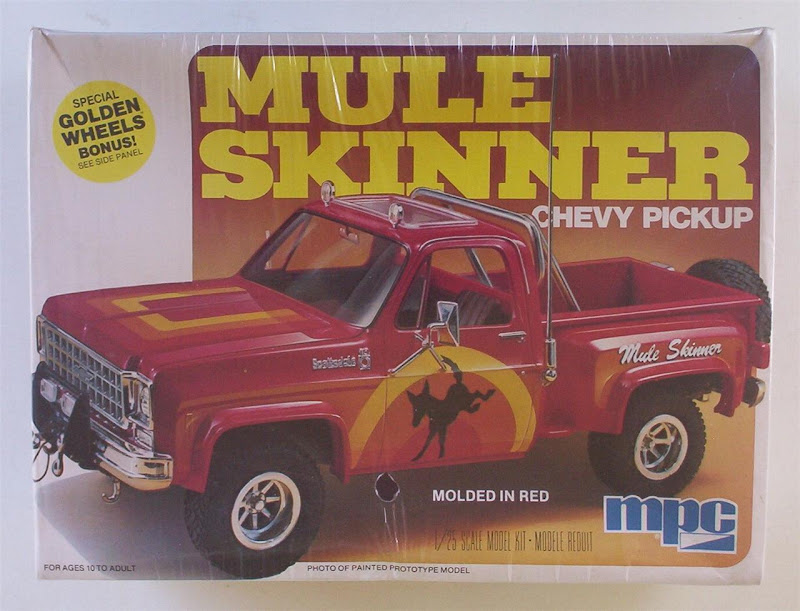 The tooling was adjusted again in 1980, this time for the new 1981 body style. This involved not only a new grille, but altering the fenders and hood and a new front bumper with integral turn signals. The box art depicts the Scottsdale 10 engraving in the 1973-80 location above the beltline, however the actual kit has Custom Deluxe 20 engraving just below the beltline. The fender flares from the previous issues are included, however they no longer fit the front fenders. The only off-road accessories remaining are the roll bar with off-road lights, a CB antenna, and tailgate mounted spare tire carrier with jerry can. Molded in yellow, stock number 1-0440. 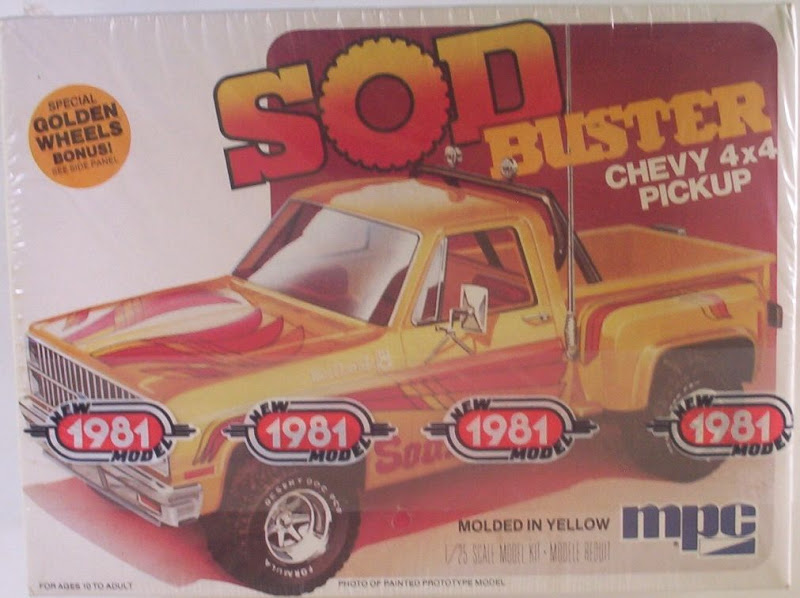 The tooling was again refreshed in 1981 to depict a 1982 model truck, which was little changed from the 1981. Differences in this kit include a new set of rims closely matching GM’s 8-hole aluminium offerings. A new grille guard was included and the hood scoop last seen in the Super Dualie returns. The tailgate mounted spare tire carrier and jerry can were dropped. All other accessories are carryovers from the Sodbuster. Molded in blue, stock number 1-0444. 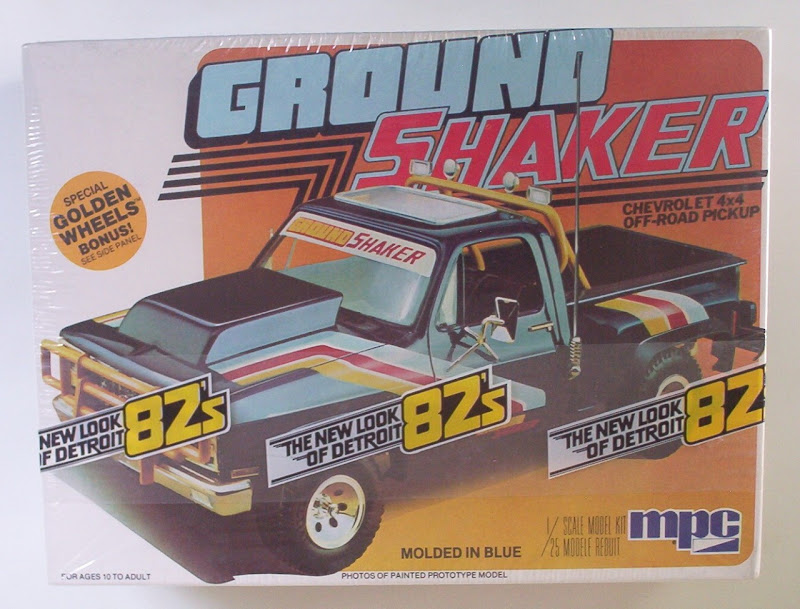 Hoping to capitalize on the popularity of the TV show The Fall Guy, MPC made the most radical changes to the tooling to date in 1982. The Custom Deluxe 20 engraving was stripped from the fenders and a new 1983-84 style GMC grille was tooled. Although the TV truck was actually an eight foot bed, the kit offering was a six foot bed. Other major change include an all-new, one piece, full width bed with opening tailgate. Suspension blocks were added to the kit to reflect the TV truck’s lifted suspension with larger wheels. The rims and tires were borrowed from the 1/16 scale Chevy truck. A new grille guard with off-road lights and winch was included, as well as a new, chromed roll-bar with off-road lights. Mirrors are the high-mount flag type. The box-art build shows a Chevy grille however the kit contents are the GMC 81-82 style. Molded in brown, kit 1-0673. 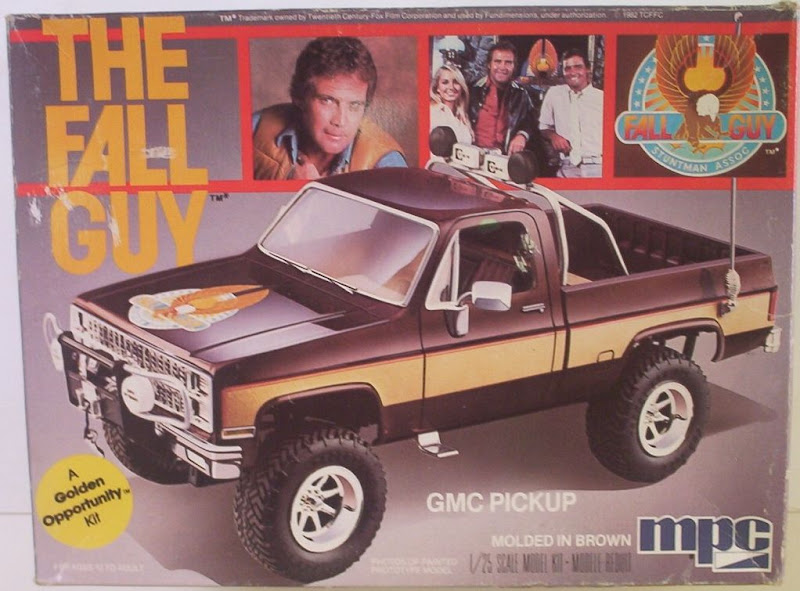 Again hoping to capitalize on the popularity of a TV show, this kit was trotted out again with some minor changes to depict Judge Hardcastle’s truck from Hardcastle and McCormick. The stepside bed returns, this time with a new GMC tailgate. The bench seat, which was last seen in the 1978 off-road release, is back once again. The window “glass” for this version was molded tinted rather than clear. A completely new chrome sprue was tooled up for this issue, updating the grille to the 83-84 style, spotlights, and new, custom wheels. The grille guard from the Ground Shaker returns, as well as the older-style roll bar. Molded in silver, stock number 1-0450. 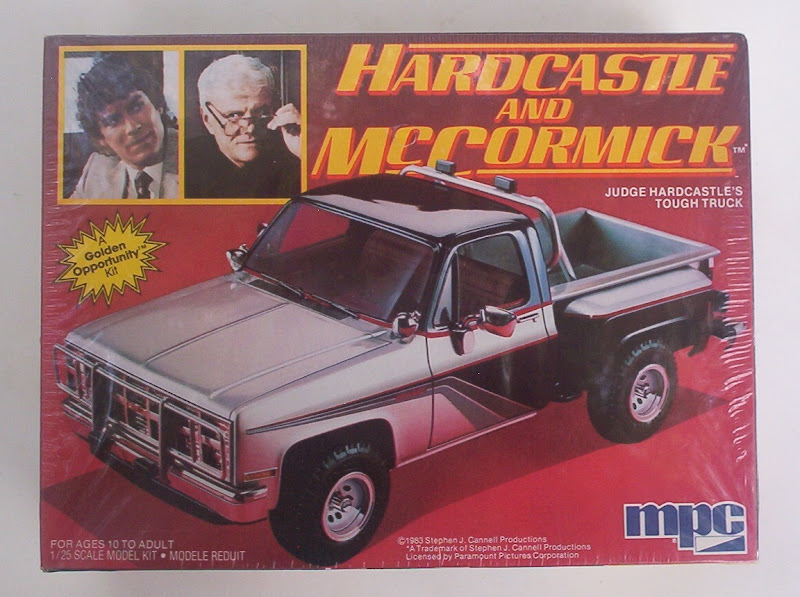 Sadly, MPC came on hard times and was eventually purchased by AMT/Ertl. This tooling sat dormant until 2005 when it was trotted out again. This issue was a combination of the Fall Guy and Hardcastle kits, resulting in the incorrect bumper/grille combination and too-big rims. A departure from the two kits combined to make it, this kit came with clear window “glass” rather than tinted. This version was issued in 2005, 2006, and again in 2007. The first two issues were molded in AMT grey while the 2007 issue was molded in white. AMT stock numbers 38363, 31939, and 38583, respectively. 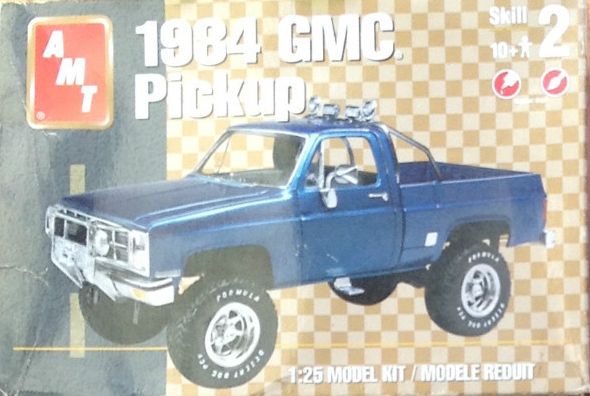 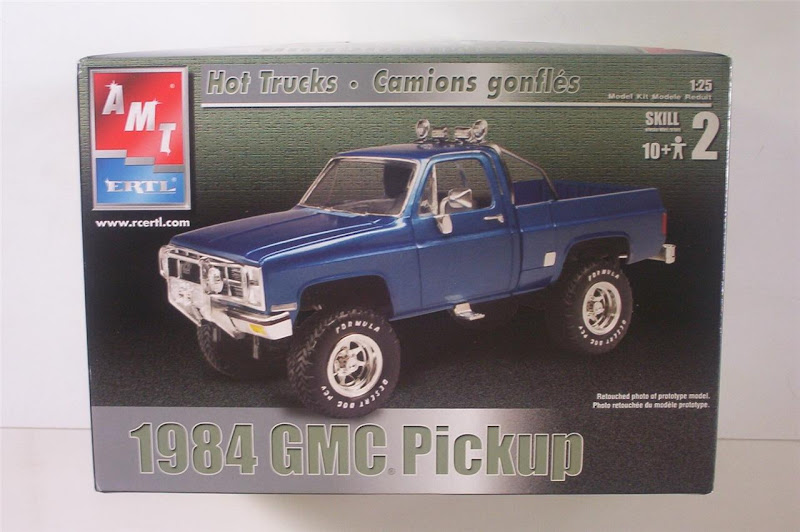 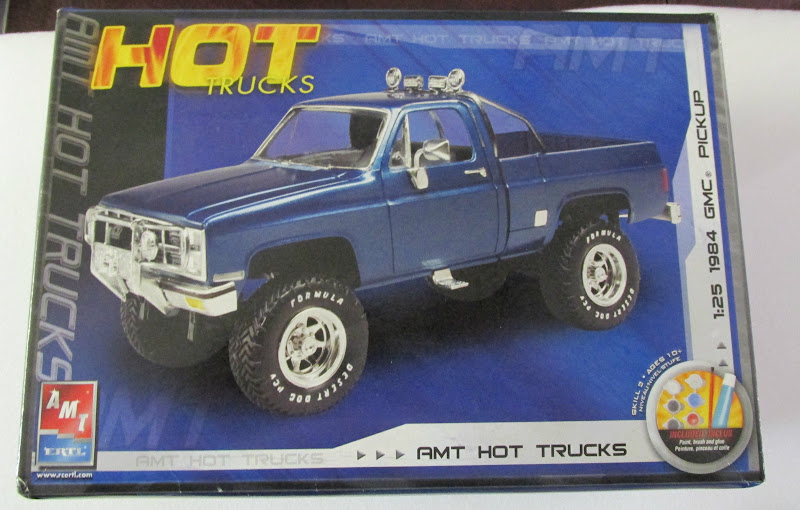 In a slightly related tooling, MPC introduced a snap kit Blazer in 1978. The tooling appears to share some pieces with the pickup line. Curiously, although released in 1978 the truck depicted is actually a 1975-76 style with the full-length removable roof. The front bumper includes an integral bull bar and off-road lights. Another set of off-road lights are included for the roof. The rims appear to be the same generic spoked wagon wheels as the pickups but the tires are two-piece plastic versions rather than vinyl. Side mirrors are the small, paddle style. Molded in yellow, black, and tan, stock number 1-3304. 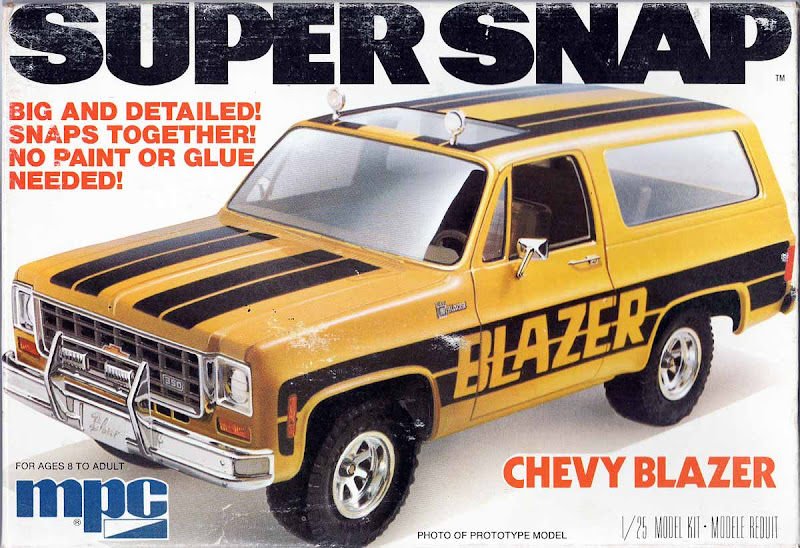 In 1979 the Blazer was re-issued as a rescue vehicle. All the accessories from the first issue are included and a light bar is added. This version is molded in three colours: white for the body, tan for the interior, and black for the chassis plate and suspension. Stock number 1-3307. 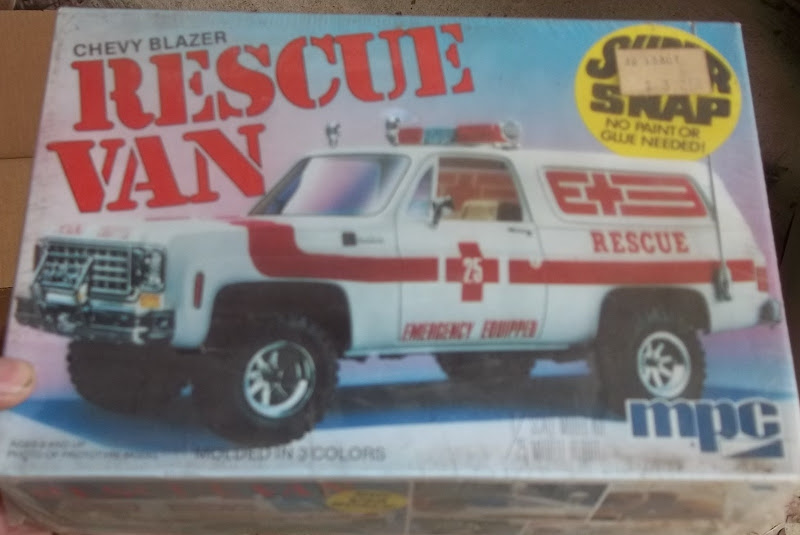 After a long absence, this kit was brought out by AMT in 2007 (a good year for these kits). This version is a straight reissue of the Rescue Van, with the exception of being molded entirely in AMT grey. Stock number 38597. 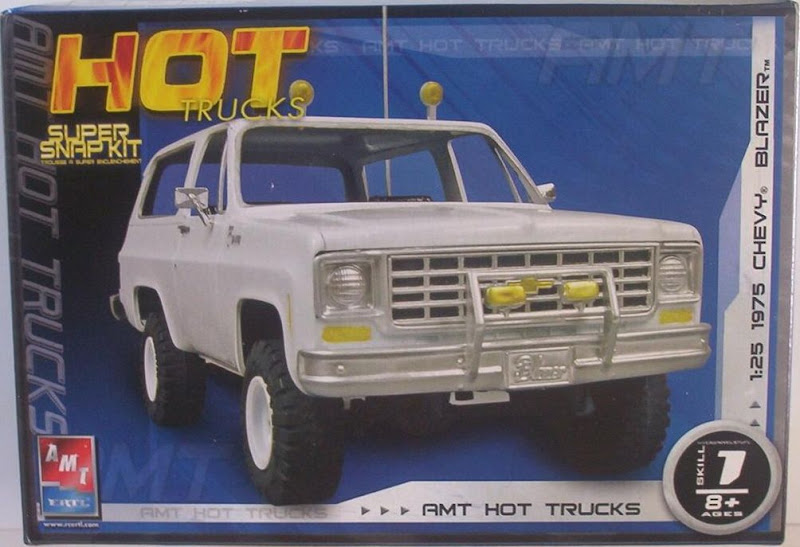 Round 2 saw fit to reissue the Blazer snap kit again in 2013 as the MPC-branded Rescue Van. Still molded in three colours and with the same decal sheet, listed as MPC797. 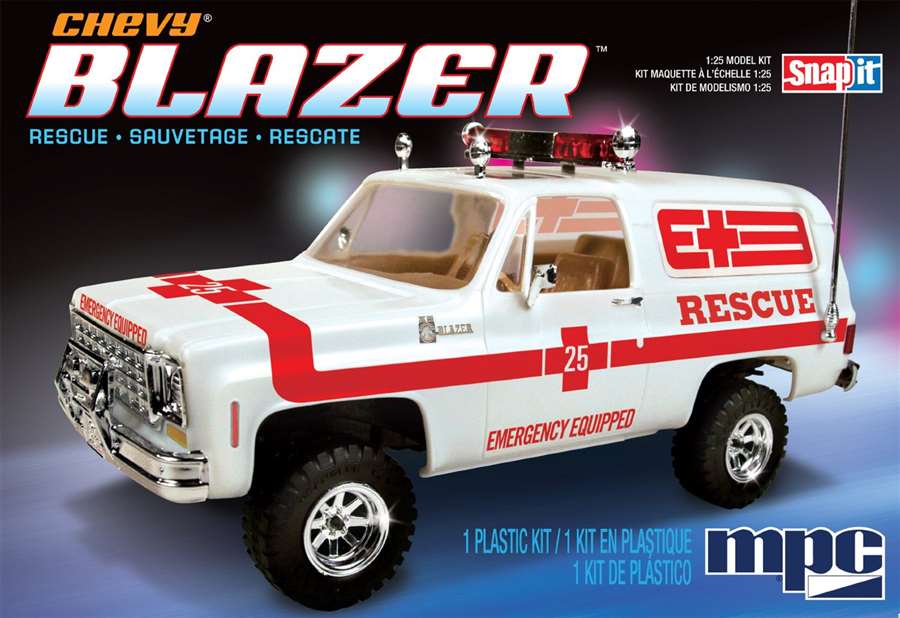 After much wait and surely fielding lots of requests, Round 2 finally reissued the GMC pickup version of this tool in 2016, identical to the last RC2-era issues. This time branded as the MPC Deserter, this version was molded in all black or all white with a sticker on the box indicating which colour is inside. Given the stock number MPC917 regardless of colour. 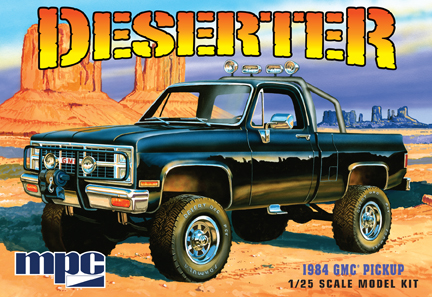 Originally posted on Model Cars Magazine message board 4 March 2013. If you would like to share this article, please remember to credit the source.