The first kit on the shelves was the Ford Off-Road Bronco, released in 1980 as kit #7307. This kit depicts a custom four wheel drive Bronco with one-piece body (rear roof not removable), grille guard and off-road lights, off-road light bar on roof, sunroof, CB antennae, spare tire carrier with cover, gas cans and carrier, entry steps, and molded-in fender flares. The engine is a crude, simplified small-block Ford. The front suspension on the Bronco kits is a new-for-1980 twin-traction beam setup, however incorrectly depicted as leaf sprung (Bronco and half-ton pickup front suspensions were coil sprung). Wheels are generic wagon wheels shared with other Revell glue kits of the era with rubber Goodyear Wrangler R/Ts. Molded in yellow and black with no chrome and tinted “glass.” 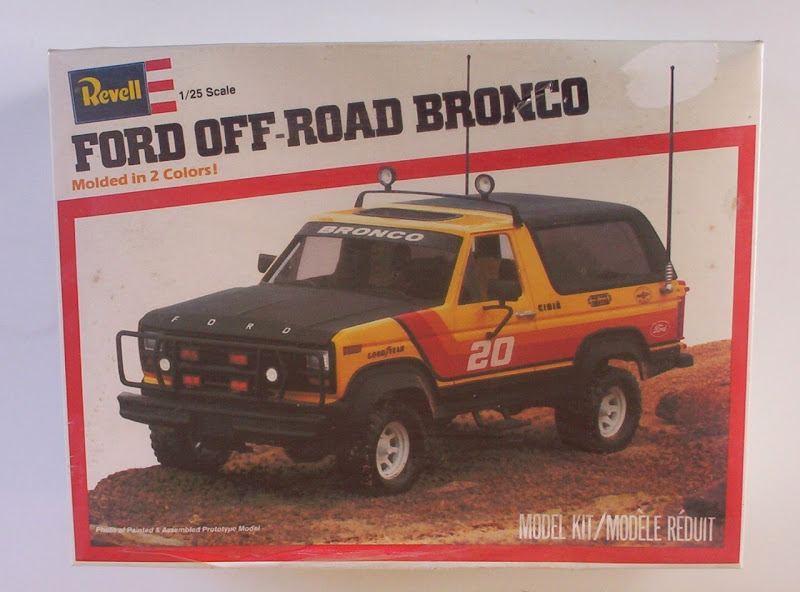 Also in 1980, another version of the Bronco was released as the LA Sheriff’s Bronco with kit #7308. The custom options in this issue were modified for a police vehicle and include all the same options in the original issue save for the roof light bar being replaced with a police light bar. The light bar itself was a single piece on a new chrome tree with blue and red decals. The wheels and tires are the same as found in the original issue, with the exception of the rims being chromed. Molded in black and chrome with tinted “glass.” 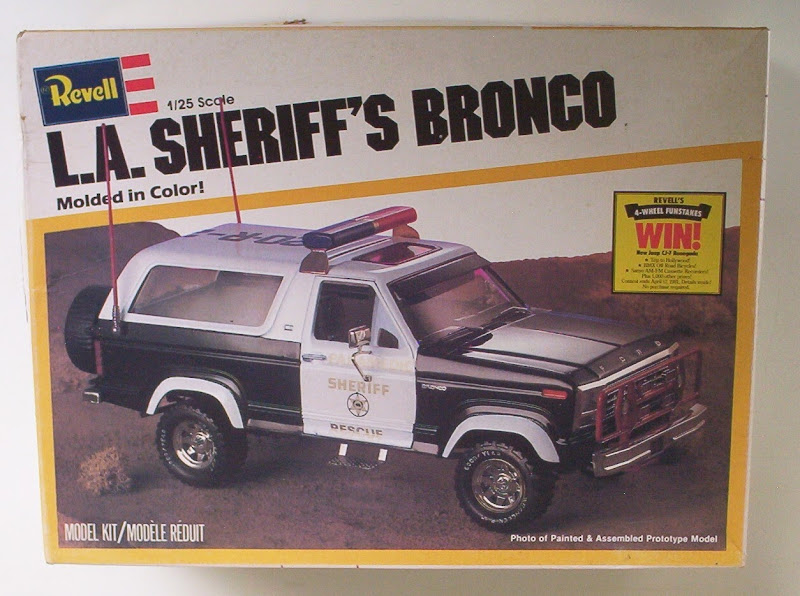 For 1981, the Bronco’s basic tooling design was copied and modified for a line of snap kit pickups. The first kit on the shelves was the Ford Styleside 4×4 Pickup, released as kit #6411. Issued as part of the Snap Kit line, this regular cab, short styleside box truck depicts a custom pickup with bull bar and driving lights, roll bar and off-road lights. The engine is a crude small-block Ford simplified for snap kits. The wheels are a generic wagon wheel shared with other Revell snap kits of the era and the tires are two-piece hard plastic Goodyear Tracker A-Ts. The front suspension was modified from the leaf-sprung TTB to a correct-for-pickups coil-sprung TTB. The kit is molded in red and black with no chrome and tinted “glass.” To date this is the only scale release of a styleside 80-86 pickup bed, albeit a bit slab-sided. 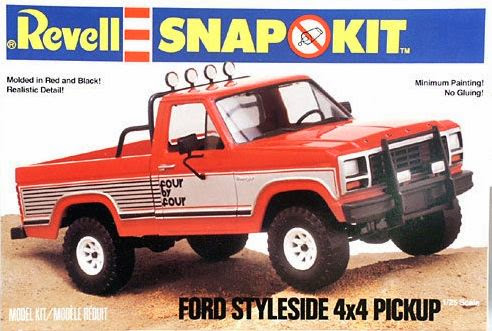 The next kit out was also released in 1981 and was the Night Rider Ford Flareside 4×4. This issue switched the styleside bed for a flareside bed, and also switched the wheels to five-slot wheels similar to those offered in the Free Wheeling package on sixth generation F-series trucks. The custom options available are the same as the original issue with the roll bar being modified for the narrower flareside bed. Molded all in black with no chrome and tinted “glass.” The original 1981 issue carried stock number 6414 with a 1990 re-issue carrying stock number 6439. 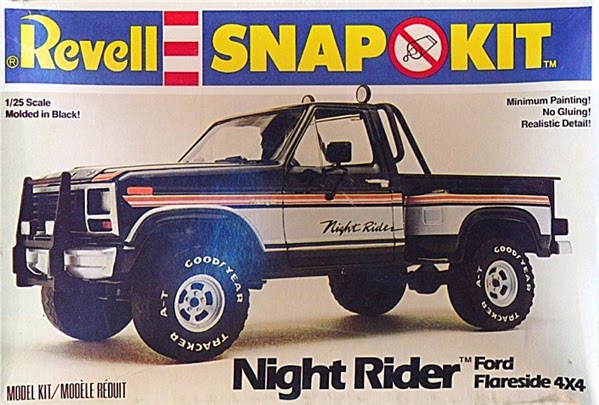 The last pickup released in this line was once again also released in 1981 with the stock number 6415 as the Ford 6-Wheeler Pickup. This version depicts a regular cab, short box, four wheel drive dually pickup, a rather rare combination. Custom options for this version are limited to the bull bar and driving lights. The wheels are Alcoa aluminium dually rims with the same two-piece plastic Goodyear Tracker A-Ts as the previous issues.. This kit was molded in orange and black for the domestic market with international market releases molded in white. No chrome and tinted “glass.” 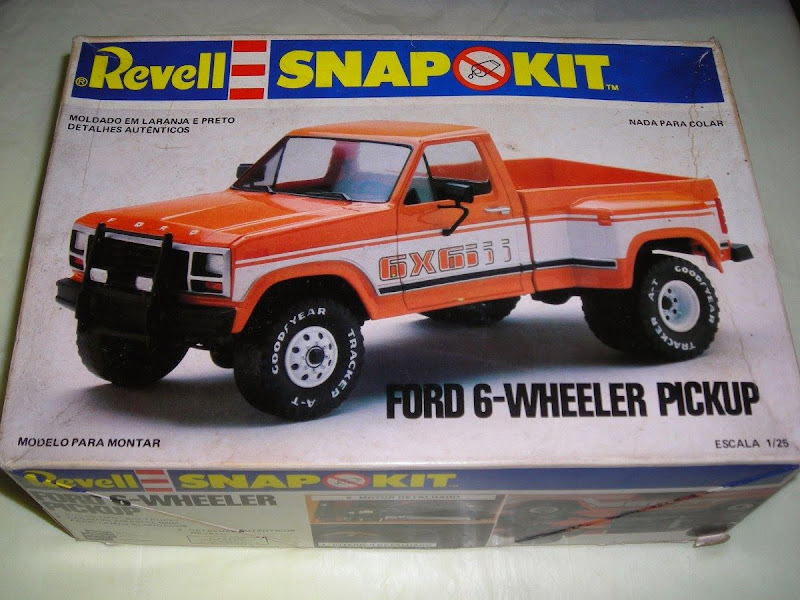 The Bronco tooling was re-issued in 1982 as the Custom Bronco. This version is an almost straight reissue of the original, replacing the chromed police light bar for the original off-road light bar. Molded in black and chrome with tinted “glass” and released with the stock number 7334. The final kit released in this tooling family was issued in 1990 as part of the combo kit Yamaha Formula One Team with a trailer and racing boat. This issue marks the biggest departure from the original tooling as the mounting holes for the roof light bar and the CB antennae are covered over, the gas can carrier is omitted (the extra hinges on the body remain), and the wheels and tire are new for this issue (five-hole swirl mags and Goodyear GT Radials shared with the Monogram eighth generation F-series kits). Molded in white and chrome with clear “glass” and kit number 7241. 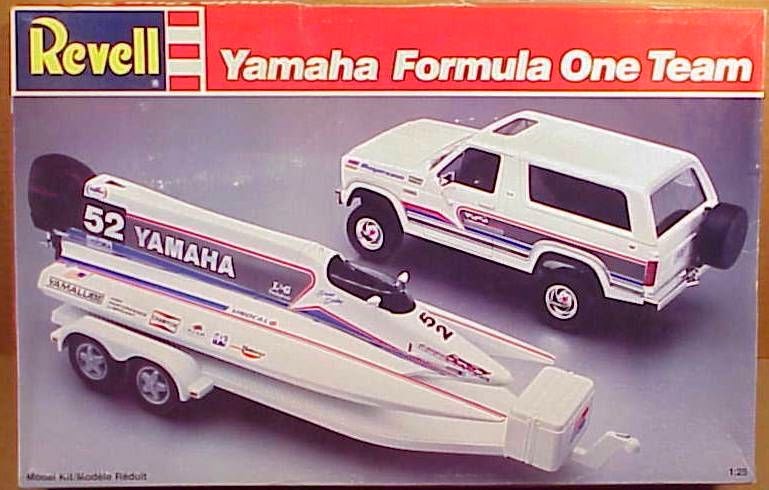 As with other Revell kits of the era, this line of kits is somewhat crude and simplified and frought with errors. The Bronco front suspension is all wrong and should be under the 6-Wheeler instead. The bodies on the pickups are pretty slab-sided with no curvature on the bottom of the body. However, when compared side-by-side with the comparable Monogram Bronco and pickup kits, the body proportions are much better and with some effort and parts-swapping can be built into nice kits!

Originally posted on the Model Cars Magazine message board 27 March 2014. If you would like to share this article, please remember to credit the source.