Following with the trend at the time of releasing annual model kits to depict year-to-year changes in the real vehicles hitting the showroom floors, MPC tooled up a kit based on the new-for-72 Dodge D/W series trucks.

The first kit issued with this tooling’s long run was the Baja Brute, which was actually the 1972 annual although not labelled as such. The truck depicted is a regular cab, 8′ full width box trimmed as an Adventurer SE. The engine is a cobbled together Chrysler B/RB V-8 that lasted throughout the tooling’s run. Options with this kit included both 2WD and 4WD suspension with stock wheel covers and 4WD 8-lug wheels, a stock hood and a bulged center hood, off-road race equipment, and service station attendant equipment. The kit has the grille used for 72-73 and is molded in white. MPC #1-0458 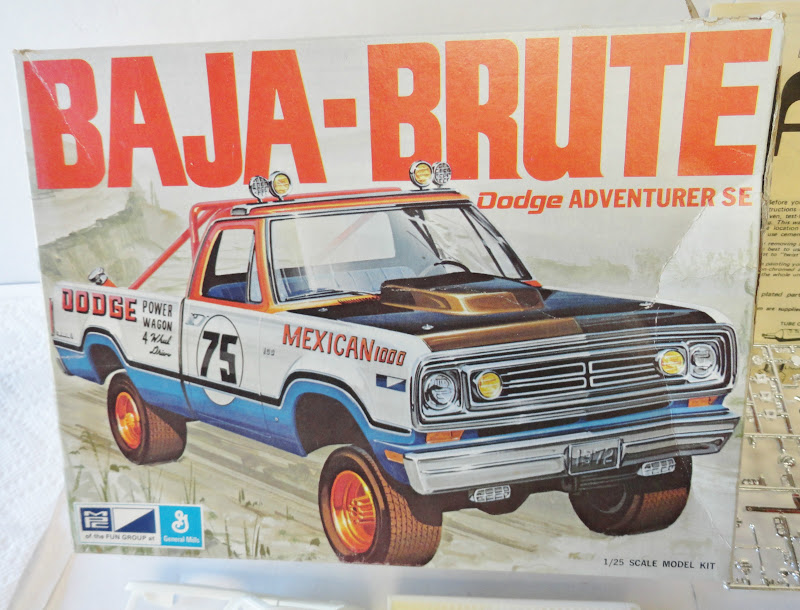 Next up was the 1973 Dodge Pickup annual. This was a straight re-issue of the Baja Brute, swapping the service station attendant building option with an emergency attendant option. The kit has the grille used for 72-73 and is molded in white. MPC #1-7309 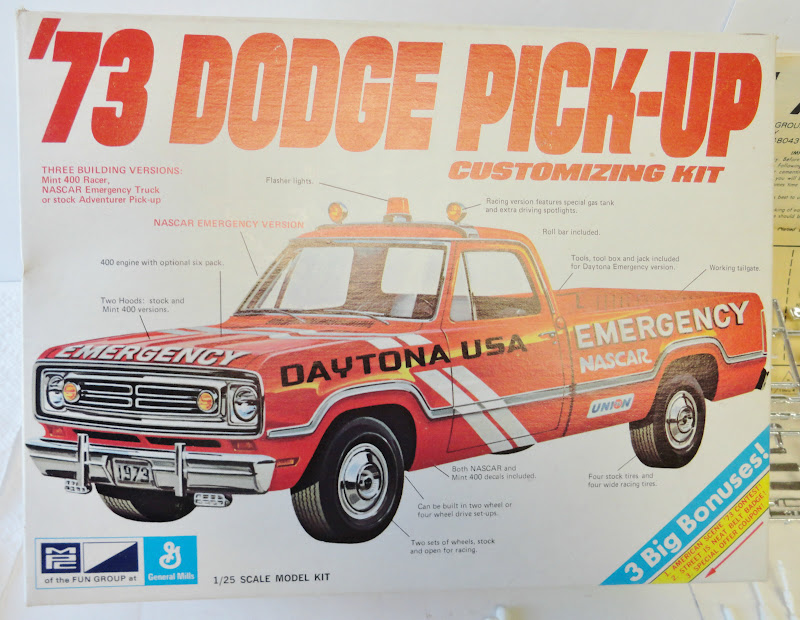 Moving on to 1974, the kit was re-issued with changes appropriate to the full size truck, which was mostly limited to the grille. This same grill was used until 1976. To keep the kit interesting to buyers of the 1973 issue, this version had many of the same options including a choice of either 2WD or 4WD and associated wheels, both hoods as before, service station equipment and a dirt bike. This kit is also molded in white. MPC #1-7409 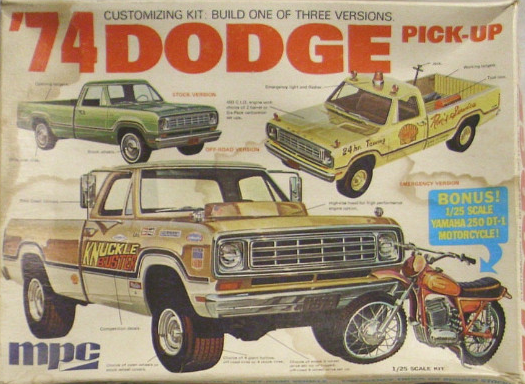 The 1975 issue is almost the same as the previous 1974 issue, however the service station equipment was swapped out for the race equipment from the 1973 issue. MPC #1-7509 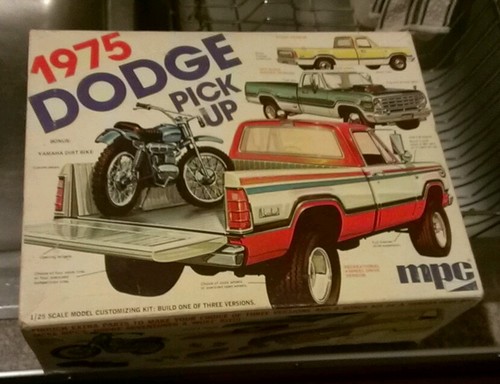 In the year of the US’s bicentennial, the changes were limited to the omission of optional truck equipment and inclusion of a second dirt bike. There also appears to be two boxes for this issue: one with ’76 in the upper left corner and the other has ‘NEW’ in the same location. MPC #1-7609 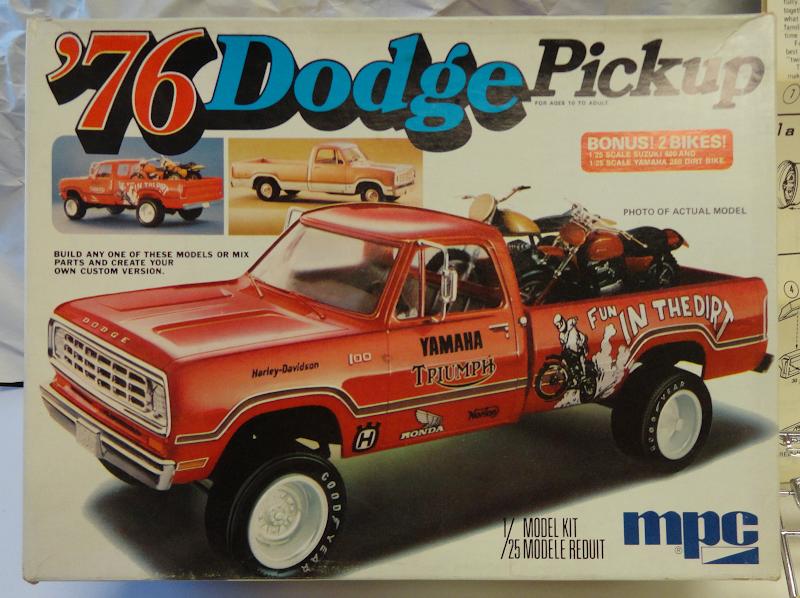 Late 1976-1977 was a big year for this tooling and saw a lot of kits issued. The body trim was re-tooled to reflect the 1:1 trim changes: the body side moulding was moved from above the wheel well flares to below them, a new trim line added just below the cab window along the entire body and bed, the Adventurer SE badge moved from behind the rear wheel well to between the front wheel well and the door, the tailgate relief panel was re-shaped and lost the ‘Dodge’ badge, and the new-for-77 grille. All subsequent re-issues would include either 4WD or 2WD suspension rather than the option to build one or the other. The first kit on store shelves was the 1977 annual with the ubiquitous dirt bike and off-road racer equipment. The bulge hood was also omitted. MPC #1-7709 Also in late 1976 a separate, non-annual version was released as an Off-Road Camper. This issue includes the dirt bike and an odd partial-length camper/sleeper arrangement. The Adventurer SE badge on the front fenders was replaced with Power Wagon 100. MPC #1-0412 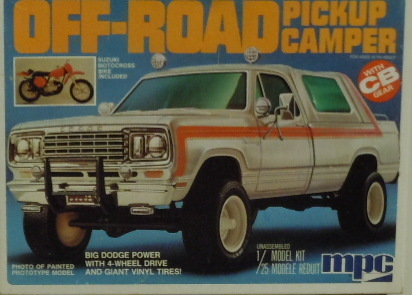 The seemingly final edition of the annual kits for this series was for the 1978 model year. Addition from the 1977 issue include wood stake box sides and a front roll pan. MPC#1-7809 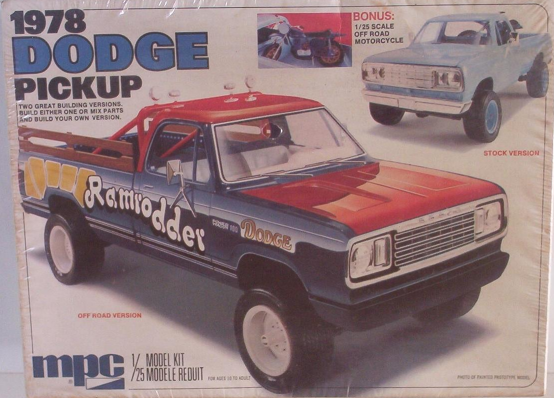 At some point in 1977, the tooling was modified to include a 6′ step side bed. The bed is an entirely new piece as is the shorter chassis pan. The cab was also stripped of any molding or emblems. The first version with the step side bed was released in 1977 as the Warlock. Buildable only as the box art truck, this kit was the first inclusion of the generic MPC 5-lug wagon wheels. Molded in black. MPC #1-0417 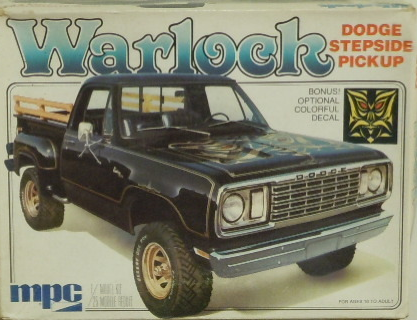 The existence of this next kit suggests that there may have been plans for a 1979 annual, but I can not seem to find any references to one. The biggest re-tooling for this kit occurred at this time to update it to the 1979 body style which included modifying the cowl, a new hood, and a new grille. Aside from the model year changes, this kit includes the same options as the previous Warlock. Molded in orange. MPC #1-0418 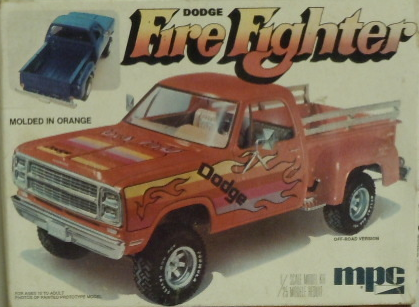 Curiously, the next issue of this kit from 1979 returns to the previous 77-78 body style, depicting the 1:1 special edition Li’l Red Express truck. The 2WD suspension returned and the kit included new 5-lug slotted mags and exhaust stacks. Molded in red. MPC #1-0427 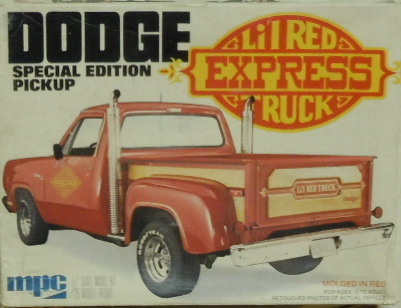 For 1980 the tooling of the Li’l Red Express was re-issued with the body of the 79-80 body style, this time in grey/silver plastic and new decals naming the truck Pumpin’ Iron. This is one of those buyer beware issues as the box art shows a 77-78 truck, however the contents are the 79-80 body. With appropriate decals this is a perfect candidate for a 1979 Li’l Red Express. MPC #1-0432 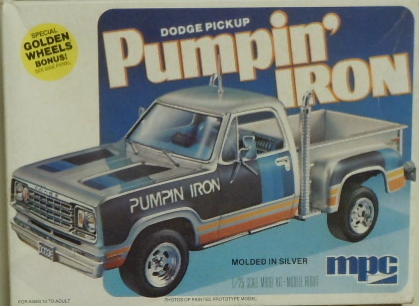 The full-width 8′ bed returned in 1981 as a pulling truck called Thunders Truck (see what they did there?). The bed was stripped of trim to match the cab, which was the same as the LRE however the kit curiously included the 79-80 grille. The bulge hood from the original annuals was modified with holes to allow headers to exit straight up. The engine also was modified to add a blower. Molded in black. MPC #1-0442 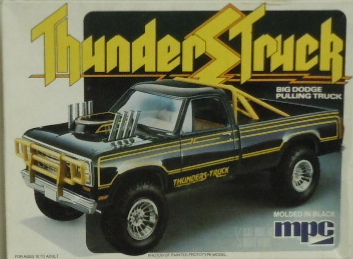 The final offering of this tooling associated with MPC was first issued in 1984 in the middle of the monster truck craze. This version is an almost carbon copy of the Thunders Truck but with monster truck suspension and wheels. Molded in red and first issued under MPC #1-0451. Re-issued again in 1988 by Ertl, the box art was unchanged other than to note that Ertl stock number 5344 replaces MPC stock numbrer 1-0451. 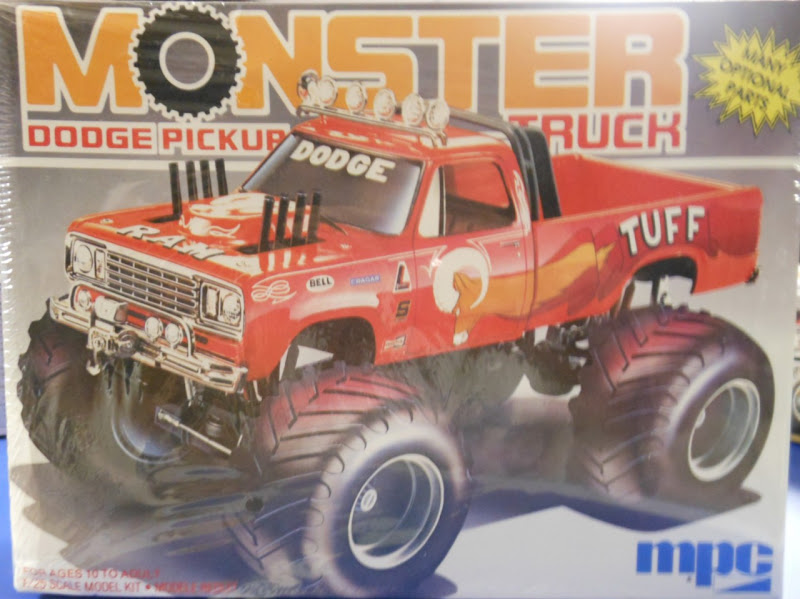 AMT later reissued the kit multiple times in 1994, 2005, and 2006, all as the Li’l Red Express and seemingly forgetting that other versions of the tooling exist. This version is the same as the original MPC LRE and Pumpin’ Iron releases only molded in the typical AMT grey plastic. Stock numbers 5459, 38248, 31938. 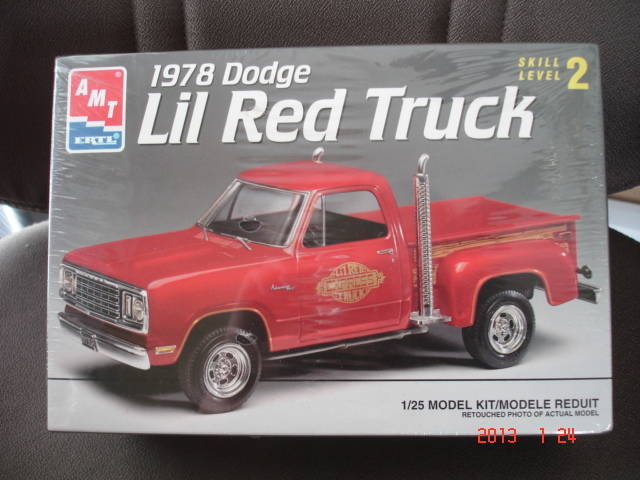 After much waiting and pent up demand, this tooling was reissued again in 2019. This issue returns to the stock 1978 configuration of a long bed pickup, however it retains the two-wheel drive suspension from the LRE issues. The body molding and emblems have been removed. New parts for this reissue are the stamped steel wheels, centre caps, and pad-printed Goodyear Polyglas tires. The chrome tree is identical to the LRE issues and includes the five-slot wheels. Accessories include a mini-bike, jack, tool box, flasher, and flood lights. Molded in white with the stock number MPC901. 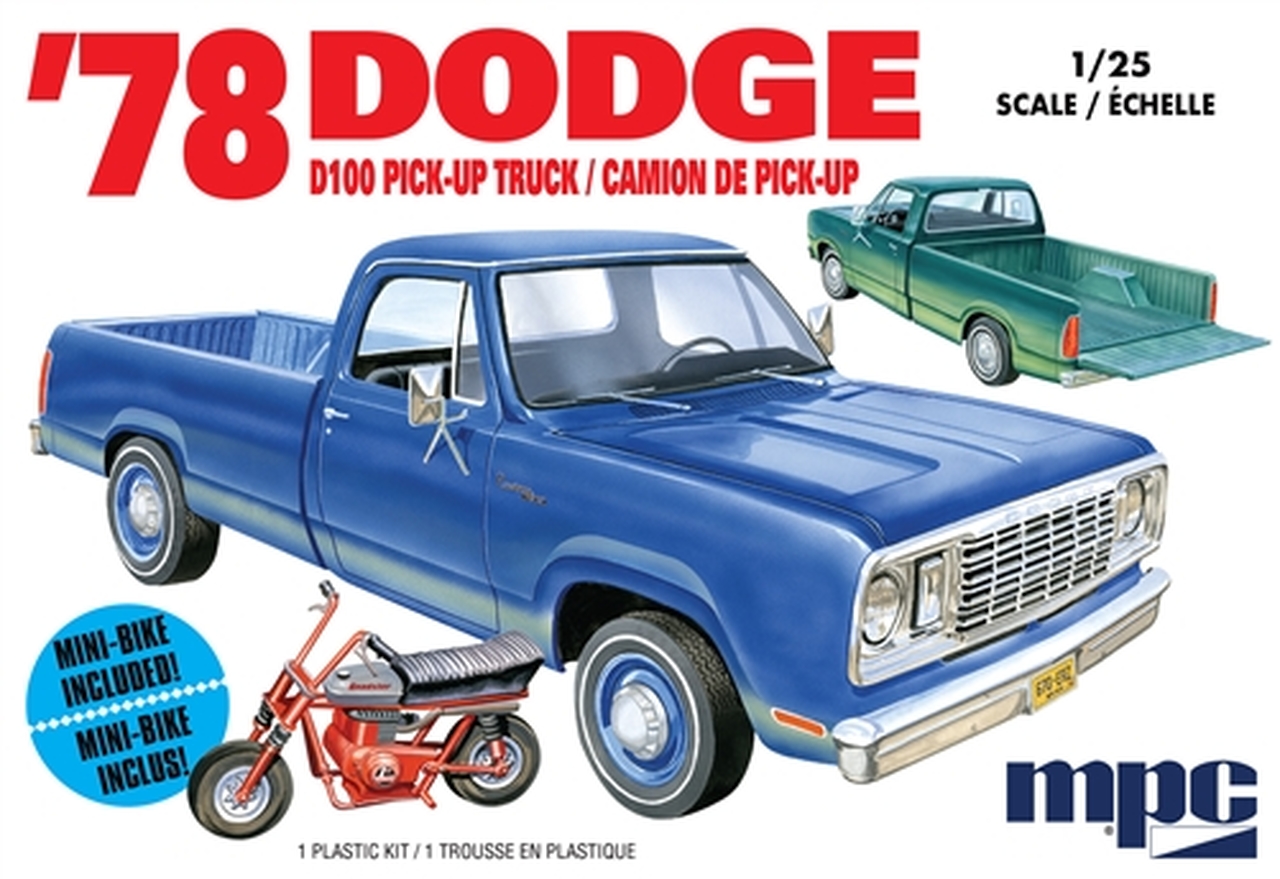 Originally posted on the Model Cars Magazine on 29 January 2013. Thanks to those posters in that thread that helped me sort out what which kits came in which order. If you would like to share this article, please remember to credit the source.